What She Ran From: The ATM Skim Scam – Best Free Kindle Books Skip to the content 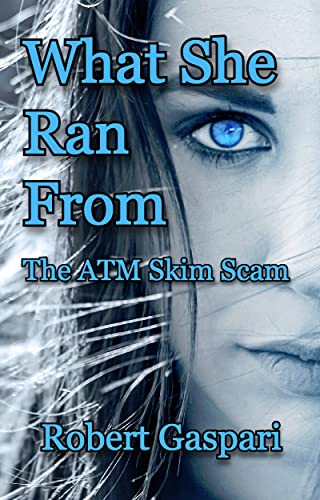 What She Ran From: The ATM Skim Scam by Robert Gaspari

What she ran from was certain death from her abusive employers. Tara Lipton discovered a secret hidden in the ATM units produced by the US branch of an eastern European company. Their software skimmed tiny amounts of cash from user accounts at random. It all came to a head after testing her suspicions. Corporate goons from the overseas HQ brutalized her coworkers to unmask who stole from their skim scam. Tara fled and disappeared, and her employers wanted to find, kidnap, make her talk, and pay for what she did and knew.

Bert Barton, an old school PI, saves the runaway woman on a train platform as a dealer pimp tries to grab up the at-risk woman. This begins the strange partnership between a man who only wanted to help and a woman with more than one dark secret. Bert helps her and gets an old FBI friend involved. As the events draw to an explosive conclusion, so does this enigmatic woman’s infatuation with the PI who rescued her. Her darkest secret comes to light as everyone scrambles to understand the whole truth.
Amazon - US Amazon - UK
Genre: Crime, THRILL
Book Length: Long Novel - 320-650 Pages